We are traveling. Are you?

The cover of Love Runs Out composed of the opening chapters of the book.

We’re considering adding custom author websites to our offerings over at Ausoma.

These would be extremely affordable but worth about ten times what they’ll cost. I have nearly 25 years of experience in web development so I work quickly and efficiently and I love doing this.

For $300 (three hundred dollars) one time cost you’ll get a custom made WordPress site with a blog and as many pages as you need. It will include all the content you provide, text and images, and will be designed to match your book (or whatever color scheme you provide.) Once the site is created you’ll get one round of edits, which includes virtually any changes you like to layout, colors, fonts, text.

There must be a catch, right?

What’s not included is the domain name and hosting, which you’ll have to buy from our preferred hosting company Charlottezweb. Domains are $10 per year and hosting is $52 per year. We also provide managed hosting; we charge $25 per year for domains and $125 per year for hosting. Managed hosting means we keep your site backed up, updated, and generally trouble free. It does not include updates, which you can do yourself easily. If you already have a domain name we can use that.

To summarize: a unique, custom WordPress site and blog for $300 plus hosting costs.

I want to do this for one author to work out the kinks before I make this a general offering. Whoever says yes first gets it.

Some of My Work

I’ve done loads of websites over the past 20 years. I haven’t been promoting my web business so my most recent work has primarily been for our own businesses, but there are a few for clients here as well.

This site, of course.

A site for our client, author Errol Barr. 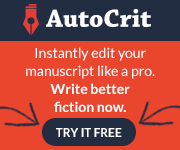 I’ve been a faithful user of AutoCrit ever since I first heard of it. In my opinion, the best automated editing and feedback tool an author can have.

Jocelyn from AutoCrit interviewed me about my long relationship with them and my writing process. Even if you’re not an author, there’s plenty there about Phil Brennan’s latest shenanigans.

It has long been accepted among designers that serif fonts are for print and sans-serif for screens (and if you like, display type and headings.)

Alex Poole writes persuasively that this is balderdash; urban myth perpetuated by the ignorant.

I’m going to find a beautiful sans-serif font and use it for the print version of my next mystery.

I already use serif fonts on many of the websites I’ve designed.

So far, nobody’s died from it.

If you click a link that takes you to Amazon.com assume it’s an affiliate link and that I’ll make a few cents on your purchase.

Here’s the thing: it doesn’t cost you a penny more. The money comes out of Amazon’s pocket, not yours. So it’s not exactly the same as if I’d invited you to dinner, then shook a tin cup at you, is it?

Click here to sign up for my newsletter and get the insiders' exclusive short story The Illuminating Adventure of Jake Calcutta and the Second Bite (Jake Calcutta #2, not available anywhere else.)